We’ve had some seriously rainy weather in Northern California this past week. The storm outside was a good incentive for me to do a little clean-up and organizing inside.

As I opened file drawers and cabinet doors, I ploughed through several years’ worth of articles, notes, photos and papers. Some were still keepers. And others—ideas past their prime—went off to recycle.

As we pause, you and I will feel lucky to be in this place, for these moments, with this extraordinary man.

And then Bill will barrel-ass that car back on down the mountain, laughing all the way and scaring us half-to-death. That’s what Bill would have called a great day.

In fact, I had a day just like this with him, shortly before he died. After our wild ride, he made tamales for dinner. He and his wife Ann and I watched the fireplace roaring against the autumn chill. Bill lay on the couch, his chocolate lab Rocky lying across his stomach. I etched that memory into my mind, for my lifetime.

Who Was This Man?

Bill Kane did plenty of things in his life. He ran organizations and taught at universities, served as Director of School Health Programs at ETR, joined the boards of a number of non-profits, helped develop the National Health Education Standards and wrote or co-authored over 50 health-focused books and curricula. If you want to know more about his achievements and the people he influenced, take a look at this article about him in the American Journal of Public Health.

Bill was a veritable encyclopedia of school health and public health, equally astute at both. His enthusiasm for these topics was energizing and contagious. He was witty, compassionate, intelligent and quick thinking. He could light up any room with his knowledge, expertise and passion.

A great example of this was the day one of my former student teachers, by then teaching school health herself, attended one of Bill Kane’s workshops. She called me immediately after the training. She was so excited she had met him. “I literally hung on every word he said,” she told me.

I loved hearing this, but it wasn’t a surprise. Bill Kane’s passion reached every person he touched. There aren’t many people you can say that about.

A Giant in the Field

Bill was one of the most important people ever in school and public health. Of course, he would never agree. He didn’t try to take credit for the things he did or the creative vision he shared. He just felt like he had the good fortune to do work he loved.

He had an ability to connect to all kinds of folks, from teachers to medical doctors to program administrators, to the marginalized and suffering, to young people, to folks from wildly different backgrounds and belief systems. He would gain their respect just by his unassuming, down-to-earth presence and his authentic sense of connection with them. He had such a way with people. 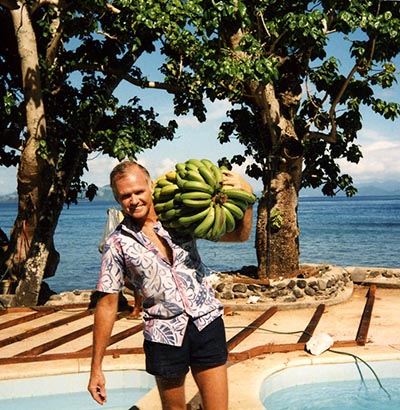 It was Bill who taught me that school health and physical education were the first public health instruction delivered to just about everyone. I suspect most people in public health don’t realize the importance of school health programs—but think about it. This is the only formalized public health education most folks receive in their entire lifetime.

For Bill, that meant school health education had to be the best quality possible, built from the foundations of public health. What do people need to know to live in healthy ways across their lifespan? That’s what we need to be teaching in school health!

Not Your Everyday Mentor

Bill was first a colleague—we were both involved in a professional group in Oregon—and then a friend. When I enrolled in a doctoral program in health education at the University of New Mexico (UNM), he became my mentor. I’ve had a lot of fine mentors in my career, but Bill was the absolute standout.

He took a laser interest in you. And he was there for you when you needed him. When I was a first summer student at UNM, Bill literally sought me out in one of my classes. I was sitting quietly at my desk when I saw this head popping up and down in the small, high-set window in the door. A friend sitting next to me leaned over and said, “I think that guy is looking for you.” 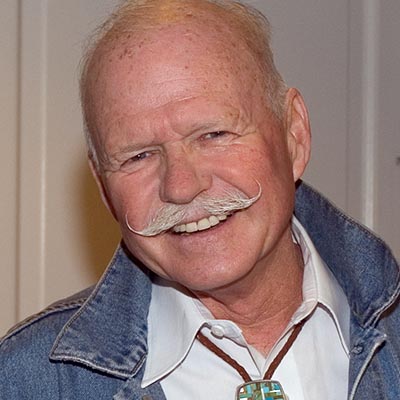 Bill waited for me to get done with the class and then walked me back to his office. He told me that he’d like to be my advisor. I was thrilled. I knew that he believed in students’ goals and aspirations like no one else. When he took you on as an advisee, it was his personal goal to see that you succeeded in getting exactly where you wanted to go.

Then he enjoyed the rewards of seeing you get there. He shared in your happiness. He praised your success in achieving goals you might not have even imagined were possible if he hadn’t offered his support and mentorship. Bill was as involved in his students as he was in his grants and publications, and you can’t say that about many faculty members at major universities!

Probably the greatest lesson I learned from Bill Kane was to embrace diversity and support marginalized populations. He encouraged me to be open-minded, non-judgmental and unconditional in service to all clients.

“You’ve got to listen more than you talk,” he’d tell me, a lesson that was especially important in working on minority health issues. The ways he showed us that in his Multicultural Health Issues class still stand out in my mind today.

That was a great lesson about not assuming all cultures practice the same beliefs. I learned from Bill not to assume. If you don’t know something, simply ask that person. When the questions are asked with respect and out of genuine curiosity, most people appreciate the chance to share their perspectives.

I am fortunate to teach in a very diverse university. I have many first generation students of Latino, Middle Eastern and Native American descent. I practice the lessons Bill taught me every day.

I listen to my students more than I talk to them. I encourage them to believe in their own voice and the value of their experiences. Many times I have stood up for students in situations where no other faculty would. I keep Bill at the forefront of my mind when I do this.

It may sound cheesy, but often I think, “What would Bill Kane do in this situation?” And every time, I know exactly what he would do. There is never a question or a doubt in my mind. That is how powerful his lessons were. 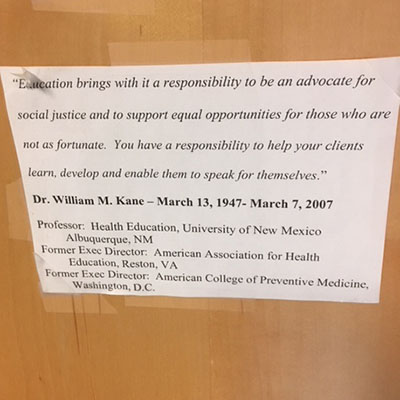 I actually work two jobs at Portland State University. I teach undergraduate public health, and I also teach the Health/PE Methods course to graduate teacher candidates in our Graduate School of Education. I supervise seven student teachers in their field placement. Like Bill, I do it for the love and to help students. One thing I really learned from Bill was to be student centered. My students appreciate that so much.  And, my students definitely know who Bill Kane is. I have a quote of his on my office door.

I was lucky to have the chance to hang out with Bill Kane for five years as his student. I soaked up every lesson I could. It was a fluke that I ended up at UNM, but I believe I was meant to be there to keep Bill’s legacy going. I know my Portland State University students are better for that!

Debra C. Harris, PhD, MST, is a Senior Instructor at OHSU-PSU School of Public Health and an Adjunct Instructor at Portland State University. She can be reached at harrisd@pdx.edu.