As many of our communities prepare to recognize National Native HIV/AIDS Awareness Day, I am compelled to honor the group of individuals who envisioned and made this day a reality. I am blessed to work today with many of these people in raising awareness and promoting testing among our people. 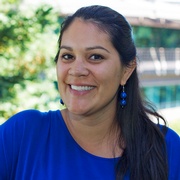 I was born and raised on the Rincon reservation in Southern California. They are a neighboring tribe to my tribe, the San Pasqual. There’s a good chance, even if you know about reservation life, mine was not what you would expect.

My parents sheltered the children in our family. I had no idea that my community was struggling with serious issues around diabetes, alcohol and drug use. We were kept busy with school and sports. My grandparents were ministers and we were very involved in our church. Education was important to my parents, and they told us all the time, “No one can ever take your education away from you.”

I was encouraged to leave the reservation for my college studies. I got my degrees and my nursing education. Then I returned to the reservation. I wanted to give back—to provide health care and education to my community.

It wasn’t until I came back, however, that I learned how serious the problems were for young people there. It was a shock to me. The youth ended up educating me about the extent of drinking on the reservation, the types of drugs people were using, and the levels of domestic violence and sexual assault. “Oh, yeah,” a student might say as we were discussing some new drug on the reservation. “My parents use that.” I began to understand that substance use was a norm for the youth, something they saw regularly in their families and the wider community.

Author Jennifer Roberts Geisler has contributed to a number of research projects exploring the impacts of underage drinking in American Indian youth and evaluating efforts to prevent harm. Here are a few:

For the past 11 years, I’ve worked on projects to prevent underage drinking among nine local tribes in my area. Our goal has been to create a new “normal” for our youth. My colleagues and I developed programs to encourage education and reduce risks. We held health fairs and organized a Dream the Impossible conference, attended by over 500 native youth. We want them to understand how valuable education can be. I hoped to persuade them, as my parents taught me, that education is something that can never be taken from them.

Over these years, I’ve built close relationships with lots of community members and leaders across California tribal communities. My husband has served on his tribe’s council and is now a tribal liaison to the United States government. We are fortunate in being able to travel to tribes, villages, and so many other reservations around the states to learn from the different native people and to share some of the things we’ve learned about promoting health and preventing alcohol and drug abuse.

Every Tribe is Unique

When we do presentations to non-native communities, my husband and I sometimes do a question section called, “Ask an Indian Anything.” Most non-Indian people have a lot of misconceptions. Many think that all Indians are the same. We get questions like, “Do you still live in teepees?” Those were dwellings among the Plains Indians. California tribes never lived in teepees!

But this does give us a chance to explain, clearly and unambiguously, that every tribe is distinct and no two tribes are alike. We also emphasize that individuals in each tribe are just as different from one another as our audience members are from their own friends and neighbors. We can talk about some of the challenges native youth face in education, which many non-native people do not understand.

For example, a longstanding tradition in California schools was for students to do a “mission project” in sixth grade. Students would learn about the California missions, often in very romanticized ways, and build models of the missions out of cardboard or popsicle sticks. For members of local California tribes, this brings back a dark history where our people were subject to forced resettlement, forced labor and physical torture. Parents were separated from children. Natives who escaped were captured and returned. Tens of thousands died of illness.

(Fortunately, a new state framework is now encouraging educators to choose other, more productive ways to discuss the missions’ role in California history.)

These memories are not that old for tribal members. As recently as my grandmother’s generation, children were taken forcibly from their homes and enrolled in Indian boarding schools. They were forbidden from using their language or practicing their cultural and spiritual traditions. It is not surprising that native children and their families sometimes resist the American educational system.

Indian Health Council, where I worked until recently, collaborated with researchers at The Scripps Research Institute studying the effects of alcohol use on people of different ethnicities. In one study, they gathered alcohol use histories from people and then used a scientific assessment scale to examine their current response to alcohol.

One of the findings that surprised our group was that the Native American subjects held a higher tolerance for alcohol than subjects from other groups. They were less likely to “feel terrible” after consuming a number of drinks, and less likely to feel the subjective effects from drinking (e.g., feeling intoxicated). When the researchers looked for reasons, one that emerged was that the Native American participants were more likely to have started using alcohol at earlier ages—in fact, some began drinking regularly as early as age eight!

This is not so surprising to me today. I’ve heard young people tell me their stories. Many see members of their family drinking daily, including siblings and cousins. As they grow up, they naturally want to do what the older kids are doing, so they start drinking themselves at eight or ten or 12. It’s just “normal” to them.

It also means they’re likely to move to harder drugs at earlier ages. They need more kick to feel high. This has given the methamphetamine epidemic an especially strong hold in Indian communities.

We are working to offer these youth a new set of possibilities, which means reducing alcohol and drug use in our communities. Our pow-wows and traditional gatherings are now alcohol- and drug-free. We also make a distinction between commercial and ceremonial tobacco. We accept ceremonial tobacco (which is not inhaled), and we discourage use of commercial tobacco.

Today, I’m working with the California Clean Air Project through ETR. I am focusing specifically on tobacco and nicotine prevention among all 109 officially recognized California tribal entities. I am excited to continue working to promote health and wellbeing in our native community.

This is my home. This is where my kids are growing up. And today, some of the youth I started out teaching are moving into their adult lives and having children of their own.

The health of future generations is one of the most cherished values of native communities. It is an honor to have a chance to share the value of good education and good health among our upcoming generation, and to learn from them how we can best support their success.

Jennifer Geisler, BS, RN, is a Community Outreach Coordinator at ETR, working with the California Clean Air Project. She has extensive experience working with Indian communities addressing alcohol and other drug use.