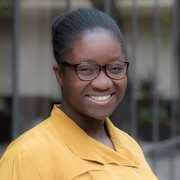 I was born in West Africa and grew up in Senegal.

In Senegal, “Jamm Rekk” is a commonly used phrase. It means “Peace Only,” a phrase we use to pass peace unto others and to accept peace in return. Simply a way of saying hello.

A couple years ago, I started a venture called Jamm Rekk Projects (JRP). These are projects that seek to promote peace through public health. At Jamm Rekk Projects, we recognize that true peace is virtually impossible without good health. Our projects therefore aim at addressing health as well as the determinants of health.

Women for Women Empowerment (WWE) is one of JRP’s main projects. WWE specifically works with girls who have dropped out of school. About 56% of Senegalese teenage girls are out of school. Most girls who are currently in school do not make it through high school. Not surprisingly, the highest dropout rates are among the poorest.

Yet these are girls who still have dreams and aspirations. The Women for Women Empowerment team understands that dreams may be universal, but opportunity is not. WWE bridges this gap among girls who have dropped out of school.

Four Components of Our Program

The WWE project is comprised of 4 main components:

Well, at least, that was the initial project plan.

Now, I say “initial” because this plan has changed dramatically since we first designed it. This is a good thing. Actually, it’s a great thing!

Once we’d planned out the pilot project, we identified a program manager and hired instructors. We recruited, interviewed and screened the girls. We fully launched the program. We were soon working with girls who seemed excited and dedicated. Their weekly schedules were quite packed.

Where Did Our Participants Go?

But each time we started a group of girls, they would stop showing up to class a few weeks into the program. This was especially true on “test” days, when we measured the skills and knowledge they were gaining from the program. Why? We soon came to the root of the issue.

These were girls who had dropped out of school. Although they had dreams, they barely believed in themselves. Many of them worked as housemaids. Many were likely used to being labeled illiterates. Their self-esteem had been dashed well before they entered our program.

And here we were throwing vocational training, communication classes and entrepreneurship courses at them. To top it all, we dared include “tests,” providing yet another opportunity for them to fail at school.

Unfortunately, we lost many of these girls at the pilot stage. It really was just way too much at once. Too many components, too many chances to fail.

A Shift in Focus

So, we slowed down. About six months into the three-year pilot project, we began to focus solely on vocational training. We did not mention the other components of the initial plan. We also threw the word “test” out the window.

Instead, we focused on output. Since we were training these girls to be expert tailors, we evaluated their performance. For example, we watched them interact with clients—how confident did they look and how well did they follow clients’ requests? We examined the quality of the products they produced and provided feedback gently yet firmly. These subtle metrics were much less intimidating than the words “test” or “quiz.”

With these adaptations in place, we recruited a few more girls for the pilot stage. It’s been over two years now, and none has run away. In fact, one of them is already taking orders from community members and receiving wages. I would like to emphasize that this is a girl who had dropped out of school and about two years ago had poor prospects for her future. Today, she is a confident seamstress. She hopes to open her own tailoring business in the next couple of years. And of course, WWE is here to support her.

What the Girls Want

Interestingly, with this newly gained confidence, the girls are now asking about communication classes. These are girls who did not even know that we had a communication component in the initial project proposal. Now that they have seen what they are capable of, they realize the importance of learning how to communicate with clients. They also perceive the significance of business and entrepreneurship skills as they look forward to starting their own business in the near future. We’ll bring the sexual and reproductive health education back into the program a couple of months before they graduate.

So we are actually back to the initial plan—not because we know such a holistic program is better than just vocational training, but rather because these young girls now have the confidence to identify what they need to achieve opportunity and success.

They are motivated. They can imagine a bright future—the bright future we had seen for them during initial screening and interviews. This led me to realize that motivation and incremental progress is crucial to success among teenage girls, especially in the population we work with.

It shows me that achieving Jamm Rekk through public health may be slow, incremental and deliberate. But it sure is worth it.

Love Odetola, MPH, is the founder of Women for Women Empowerment. She has worked in public health projects in Senegal, India, Switzerland and the United States. She is a 2017 Kirby Summer Intern here at ETR. She can be reached at odeto002@umn.edu.