In 2012, the U.S. Food and Drug Administration approved oral Truvada for pre-exposure prophylaxis of HIV (PrEP). In a very short period of time, PrEP has substantially changed the HIV prevention landscape. It’s effective (when taken) and has an excellent safety profile.

How well is it working in different populations? I took a quick dive into some recent reports to get an update.

PrEP has altered the landscape in HIV prevention in extraordinary and profound ways. It’s changing the lives of vulnerable individuals. It’s also bringing about big changes for the HIV workforce—health care providers, prevention specialists, outreach workers, social workers, educators and more. In fact, I believe we’ve entered the most dynamic period in our fight against HIV since 1996, when the advent of highly active antiretroviral therapy revolutionized treatment and saved countless lives.

The AIDS Foundation of Chicago (AFC) collaborates with a range of providers throughout our city and state. And they prove the point. People who could benefit from PrEP are excited about a new option for HIV prevention beyond latex. Providers are newly inspired by the possibilities. And—if you’ll allow me an indulgent moment of pride—a working group of local organizations (including AFC) has put together a beautiful, sex-positive social marketing campaign about PrEP that is truly unique.

Here’s what I consider the most powerful shift we get with PrEP. For more than three decades, our HIV prevention message has been loss-framed. “Sex is dangerous. Sex is risky. You need to reduce your risk. You need to wear a condom. You must do this whether or not you like using condoms.”

That message was risk focused and often shame based. And there was more than a bit of “sex is bad” subtext. The only way to earn your boy or girl scout badge, to be deemed a good sexual citizen, was to use male/female condoms. That’s OK for someone who doesn’t mind using condoms— and can do it each and every time. Badge awarded! But condoms aren’t an easy choice for everyone. You were “bad” if you didn’t adhere to the strict “use a condom every time” dogma.

Let’s Not Even Use the Word “Risk”

Today, condoms are one option—and they remain a viable one—but they’re not the only choice. Instead of starting out a conversation with a focus on how to mitigate risk, we can now ask a client, “What’s the best sex life in the world look like for you?” Let’s not even use the word “risk.” We can talk about pleasure, intimacy, love, lust. We can invite all kinds of possibilities—open, loving, communicative—and then work with people to reach their personal sexual goals with a range of tools.

Condoms, when used consistently and correctly, are a great way to prevent sexual transmission of HIV. They’re relatively easy to use and widely available. For many people, they are a great choice. For many others, the “consistent and correct” part of the equation is hard to master all the time, each and every time.

Truvada, the current PrEP medication, is up to 99% effective when taken consistently. Taking that daily pill is going to sound better to some folks. Plus PrEP does not need to be negotiated with one’s partner(s), nor does it need to be deployed at the time of sexual contact. When we let people know that there are a range of options to consider, and that it’s possible to tailor prevention strategies in ways that support their personal sexual interests, we engage in some great, authentic and productive conversations.

The HIV Workforce Comes on Board: Ready, Set, PrEP!

People working in HIV prevention, care and housing are excited about PrEP too. They have a vital role to play in sharing the message. AFC’s Project Ready, Set, PrEP! trains the HIV workforce in Chicago and throughout Illinois on exactly how to do that. We’re in our fourth year and the trainings are still very popular.

We always partner with other groups when we offer these trainings. We’ve worked with the Chicago Department of Public Health, local HIV organizations and other groups around the state. Because of these partnerships, we’re able to offer trainings that speak to the specific issues and needs of the providers who attend. We use the experience and information they have—they’re the experts on their own clients.

When we started these trainings, people were focused on the science. How does PrEP work? How trustworthy are the results? Today, participants accept that it works.

Now the HIV workforce wants to know, “How do we get this message out to the populations we serve? How do we make this work in our communities?” When we talk about using gain-framed prevention messaging in a sex-positive context, people get re-energized about the work they’re doing. It’s a remarkable shift to watch!

If you haven’t already seen our PrEP4Love campaign, I hope you’ll take a look right now. We chose four couples to be featured at the website, Chicago rail lines, on Facebook, Instagram and in other web ads. (You can see photos of all the couples in this article about the campaign.) 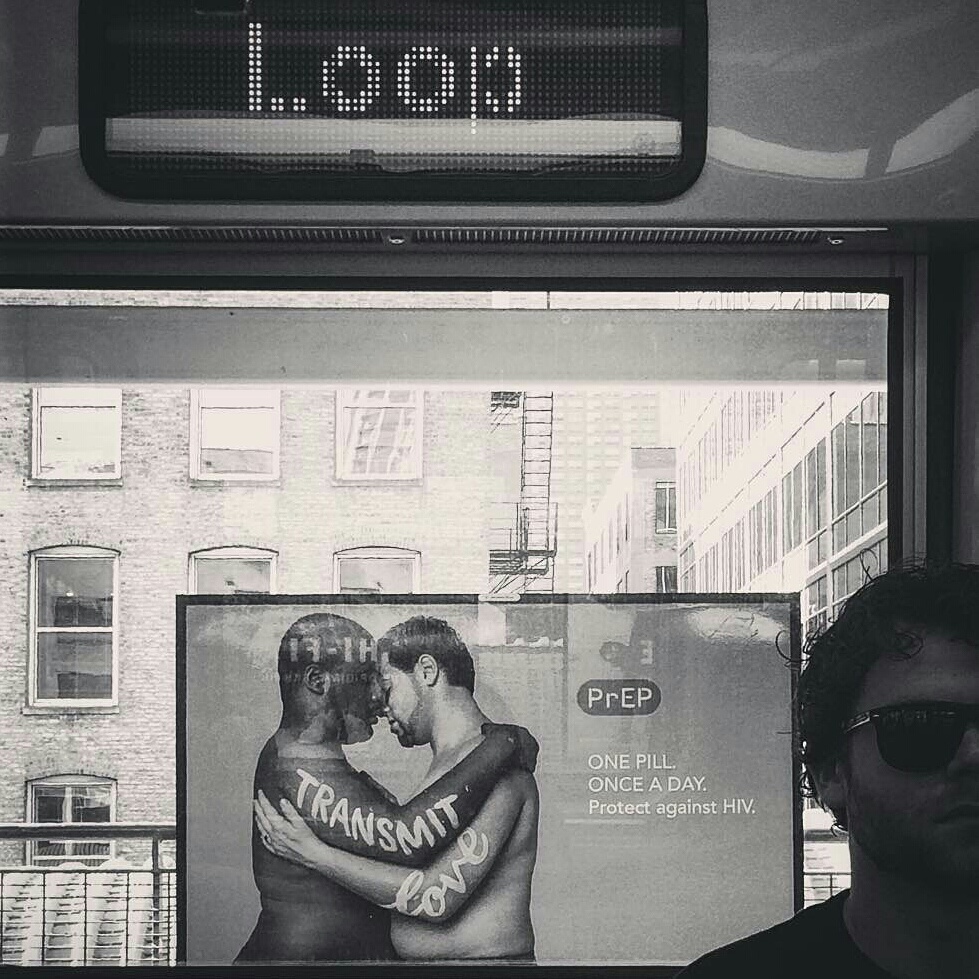 These are real people, not professional models. They are gay and straight. They are cisgender and transgender. All of these couples have real relationships of some sort—we wanted to capture a genuine quality of connection and intimacy in the photos, and I think we did that.

The messaging talks about desire and connection. Our captions are amazing. “Catch Desire.” “Transmit Love.” “Contract Heat.” “Spread Tingle.” We took words like “catch” and “spread,” which can sound scary when thinking about disease transmission. We turned them around and made them desirable.

We were very mindful that all our photographs include faces because sex is as much about the head and heart as it is about body parts (and we’ve all seen those HIV prevention campaigns that show just abs, or arms, or other disconnected parts of bodies). The couples we feature have “real” bodies, bodies we don’t often see in advertising, bodies like most of us who aren’t sporting six-packs.

This is powerful stuff! Gorgeous photos. Sex-positive and body-positive messaging. People love them.

This campaign has been highly visible in Chicago. It took work to get it going. We had a coalition of more than 18 agencies, and over 200 individuals, representing organizations throughout Chicago. It took us months of idea-generation to get to these concepts. We got pro bono support from a sister group of creative agencies (Leo Burnett, Starcom, Spark and Razorfish). They were thrilled to work on something that had to do with culture, society, health, meaning, impact—it was a lot more exciting than selling soap.

All of that collaboration meant we had plenty of stakeholders ready to promote the campaign. But wait, that’s not all! We obtained funding through a local foundation, The Alphawood Foundation, and supplemented that with more than $100,000 donated by well over a hundred individuals in amounts ranging from $50 to $10,000.

Finally, our wonderful models were also selected for their social reach. We invited people who were volunteers, advocates, those with activist sensibilities and substantial followings in social media. Many have become PrEP ambassadors. They’re proud to make an impact in their communities, knowing they’re having conversations about PrEP with people who are going to listen to them.

Clients can address other sexual health needs—like STD prevention and testing. Providers can check up on primary health care issues—flu shots, smoking cessation, blood pressure checks. A lot of these individuals have never been connected to a regular health care provider before. That’s an empowering experience for them, and a great benefit to the community.

In fact, Dr. Demetre Daskalakis, Assistant Commissioner with the New York Bureau of HIV/AIDS Prevention and Control, coined one of my favorite lines about this: “PrEP,” he says, “is the gateway drug to holistic health care.”

PrEP is indicated for a lot of people. Last year, the CDC came up with an estimate of the number of U.S. adults who could benefit from PrEP. Whether you like the way they did these estimates or not—you might think the numbers should be higher, or lower—the take-home is that this is a treatment option we need to present to a lot of people. The CDC identifies 1.2 million people: almost 500,000 gay men, 115,000 injection drug users, 157,000 heterosexual men and 468,000 heterosexual women. Most of these individuals are Black and Latino, who remain more vulnerable to HIV compared to people in other communities.

That’s a lot of different groups, comprised of distinct individuals with unique interests and needs. The key to any kind of HIV prevention, including PrEP, is to understand what is at the top of a client’s list of concerns. Transgender people often wonder if PrEP interacts negatively with hormone therapy (it doesn’t). Someone with insecure housing might be more concerned with where to sleep tonight than starting up a course of PrEP. Someone in an abusive relationship might decline PrEP out of fear that the partner would find out and be enraged. Many Black people have had negative interactions with the health care system and are not necessarily excited about four visits a year with a provider who may not be culturally competent.

So we need to get out of our HIV silos. We need to know about our clients’ own health goals, their employment status, housing, hunger, violence (including gun violence), education, substance use. We need to know about their relationships and what is important to them. We need to be able to meet people where they’re at, work with them holistically, and bring PrEP in as one part of that work. And, of course, we want to bring it up in the context of an open, positive dialogue about sex—that sex is good, wonderful and healthy.

We live in such a sex-negative culture. Some people worry that their choice to use PrEP reflects something wrong about them. Does it say that they don’t want to control their sexual desires? That they’re unwilling to use a condom? That they can’t control their partner’s behavior?

I want to frame the choice to use PrEP as positive and empowering. It’s thoughtful, careful and aware. People who do this are taking care of themselves. That’s a good thing. That’s responsible.

The configuration of PrEP we’re working with now is the first version. More is coming. There will be new modalities, new opportunities and new choices.

I love the new options PrEP is giving us, and I want more. Right now, we have a couple of choices. But I’m ready for a full buffet! I want to see the number of HIV prevention choices match today’s range of contraceptive choices. The more options we can give people, the more likely they are to take action to stay healthy. More options means more safer sex. More—it’s  a good thing.

Jim Pickett is Director of Prevention Advocacy and Gay Men’s Health at the AIDS Foundation of Chicago. He has been an advocate and activist for HIV prevention for over 20 years. He can be reached at jpickett@aidschicago.org.