HIV: Let's Change What We're Doing and End This Epidemic

I haven’t always been an outspoken young man. I learned to be outspoken when I was diagnosed with HIV.

After the counselor told me, “Your test is positive,” I didn’t know what to expect. I wanted examples. I wanted to hear stories from people like me. But there was not a lot of representation from young Black men going through this.

I thought, “Okay. I need to be the example. I am not afraid to share this.” So I started to tell my story among my friends and in my community.

HIV: Let's Change What We're Doing and End This Epidemic

I haven’t always been an outspoken young man. I learned to be outspoken when I was diagnosed with HIV.

After the counselor told me, “Your test is positive,” I didn’t know what to expect. I wanted examples. I wanted to hear stories from people like me. But there was not a lot of representation from young Black men going through this.

I thought, “Okay. I need to be the example. I am not afraid to share this.” So I started to tell my story among my friends and in my community.

Read More about HIV: Let's Change What We're Doing and End This Epidemic 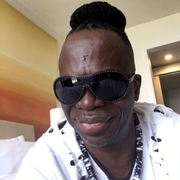 When I was first asked to prepare something to commemorate National Caribbean-American HIV/AIDS Awareness Day, I jumped at the opportunity. After all, writing has always been my primary way to educate, process emotions and create.

But as I sat at my computer, I began to feel a little apprehensive. As an African American man with southern origins, I started to second guess my right to attempt this endeavor. Was I the person to speak to this commemoration?

I have worked as an HIV preventionist for more than two decades. In that time, I’ve had the opportunity to work alongside several powerful men and women of Caribbean descent. They have transformed and enhanced my understanding of how the intersection of ethnicity, HIV, gender identity and sexual orientation often plays out in Caribbean communities, and in other Black American communities as well. So I speak today to honor the achievements of this community and what I have learned from them.

These are individuals like Colin Robinson, a leader in gender justice work in the U.S. and the Caribbean (see some of his work here). And Dr. Gisele Pemberton, a public health practitioner and researcher and HIV/AIDS advocate. And Antoine Craigwell, founder and CEO of DBGM, an organization dedicated to addressing the mental health issues of LGBT people of the Black diaspora. And the amazing Kim Watson, advocate for transgender men and women in the Bronx who won a high-profile case in which the U.S. attempted to have her deported to her native Barbados.

It also includes one of my closest and dearest friends of more than 15 years. This man, in the various iterations of our relationship, has given me great insight and perspective into what it means to be a man of Jamaican descent, reared and living in urban America, and attempting to seek out and stand in his own truth while remaining firmly rooted in his culture and family. (Love and respect to my personal “Bossman.”)

HIV Prevention and Treatment in the U.S.

June is Caribbean-American Heritage Month. Embedded within this month is National Caribbean-American HIV/AIDS Awareness Day. Commemorated on June 8, the day seeks to encourage members of the diverse Caribbean communities to obtain education about HIV, engage in HIV testing activities and become more involved in their own preventive and treatment-based sexual health.

There are an estimated 550,000 undocumented Caribbean immigrants in the U.S. Worries about deportation and difficulty accessing quality health care can complicate efforts to engage members of these communities in HIV prevention efforts. So does stigma related to HIV. The great diversity of Caribbean populations (e.g., Dominican, Jamaican, Trinidadian—there are over 30 territories in the Caribbean, each with distinct cultures, traditions and histories) share some similarities but also have many substantial differences.

These issues often act as a barrier to honest dialogue related to sexual health and accessing preventive care and treatment. There remains much work to do.

HIV in the Caribbean Region

As of 2008, an estimated 240,000 Caribbean men, women and children were living with HIV in the Caribbean region. Twelve thousand died that year from AIDS-related complications. These numbers affect our U.S. communities as well. There is a constant flow of migration between the U.S. and the Caribbean. Friends and family members with HIV may come to the U.S. seeking medical care or to escape HIV-related persecution.

It is imperative that we continue to celebrate current leadership in Caribbean communities here and abroad. We must also cultivate, mentor and support new leaders. This is our best hope for reducing these unacceptable rates of HIV.

We must continue to battle misperceptions with up-to-date information. Working with Caribbean-American educational and faith-based institutions, we must cultivate an atmosphere of acceptance and tolerance of sexual minorities and gender-fluid individuals within the Caribbean diaspora.

We must also never forget the many we have lost to AIDS-related deaths, and those still suffering in silence and existing in fear and isolation.

What Will You Do?

So as June 8 quickly approaches, let us all think about what role will we play in expanding the dialogue. Let’s create new paradigms of thinking, planning and implementing HIV-related prevention and treatment activities. Let’s get beyond messages about consistent condom usage and being monogamous. It’s time to also talk about biomedical interventions like pre- and post-exposure prophylaxis.

We must create interventions that are respectful of cultural distinctions, recognize socioeconomic issues and offer gender-specific focus. Let us lend our collective voices to the advocacy, and where necessary, let’s do some good, old-fashioned activism. Let’s honor the legacy of Haitian-American poet Assotto Saint, who was one of the first African American activists to go public about having HIV.

I encourage us all to share our stories, challenge our assumptions and expand our definition of what it means to be Black in America. Too often, “Black” translates into research, programming and services that target African Americans to the exclusion of Caribbean, Afro-Latino, Continental African and Afro-Caribbean communities. Let’s bring in our Caribbean populations and communities, recognizing that they are nuanced by geographic location, documentation status and political ideologies. Let’s reduce—and then eliminate—stigma. Let’s make HIV-related services routine within the continuum of overall physical, mental and spiritual health.

Most importantly, these are recommendations that must be digested, retooled and implemented by leadership within the Caribbean-American communities most deeply affected by HIV, almost 35 years after the first cases of AIDS-related Kaposi’s sarcoma were being diagnosed. Let us celebrate the leadership and work that is currently taking place, while not resting on false laurels. There is quite a bit more work to be done.

Donald Powell, MHS, is Senior Director of Policy & Development with Exponents, a New York City nonprofit serving individuals affected by HIV, substance use, incarceration and behavioral health challenges. He can be reached at dpowell@exponents.org.