Know any teens who’ve fallen in love lately? Chances are that you do. Most teenagers have been in love or have been involved in a serious romantic relationship by age 18 (Carver, Joyner & Udry). While teens often do not share their romantic experiences with adults, those of us working with adolescents—educators, health providers, researchers, community workers—need the best understanding possible of young people’s romantic relationships. 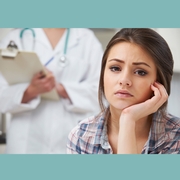 Scientific studies continue to support the notion that teens today actually have less sex than their parents did as teens. Yet nearly one in four teens will become pregnant by age 20, and half of the new STDs in the U.S. each year occur among people between the ages of 15 and 24. While these trends may seem contradictory and even a little bit confusing, one thing is for sure: our nation’s conversation about sex and sexual health is changing, and it’s a pivotal time for providers of all types to be a part of the discussion.

Studies do consistently report that today’s adolescents are engaging in risky sexual behaviors at earlier ages. The Centers for Disease Control and Prevention (CDC) recently released its annual snapshot of reported STIs, noting the total combined cases of chlamydia, gonorrhea and syphilis reported in 2015 reached the highest number ever. Youth ages 15 to 24 were the most affected, accounting for nearly two-thirds of diagnoses.

In addition to number of partners and condom use, research suggests several other key factors have a significant influence on sexual decision-making that increase risk of STIs and unplanned pregnancy. These include substance use prior to sex, depression and low self-esteem, homelessness, school failure, sexting, and history of abuse and dating violence.

Why are adolescents engaging in risky sexual behaviors at earlier ages than ever before? And what can providers do about it? In this important arena, the research and work of my team at Possibilities for Change is acting for change.

ACT for Change: The Approach

In 2014, the Journal of the American Medical Association published a study that reported that one-third of all adolescent health maintenance exams were completed without any discussion of sexual health. For those providers who did introduce the subject, an average of 36 seconds was spent discussing sexual health. Given those findings, our nation’s public health institutions have recognized the need to improve the lines of communication around sexual health.

A substantial step in the right direction starts with improving sexual health screening and behavioral counseling in primary care and school-based health centers. To this end, we teamed up with the National Association of Community Health Centers, the Health Center Network of New York, and four primary care and school based health centers across New Jersey and New York for a pilot project using the ACT Sexual Health (ACT SH) virtual health educator.

Through the ACT Sexual Health system, teens use a smartphone, tablet or another digital device to respond to a set of questions that identify sexual risk behaviors. The teen receives a summary of responses and a tailored behavior change plan. The health care professional receives a summary of responses that includes a comprehensive sexual health history along with a safer sex action plan tailored to each teen. Teens and providers can then participate in face-to-face, tailored, evidence-based counseling for safer sexual behaviors. The real-time, prioritized insights delivered through the dashboard allow more focused and effective discussions, as well as ease of tracking and documentation to support ongoing safer behaviors.

Teens sometimes feel uncomfortable responding to face-to-face questions about their sexual behaviors. Data gathered from adolescent risk assessment systems (see, for example, here, here and here) confirm that teens are more honest about their behaviors when using technology with no judgmental faces or tones coming back at them. In addition to comfort and confidentiality, the technology offers interactivity and individualization that increases engagement. The program also offers ongoing support through text messages that speak to teens in a way that they prefer.

Click on the image below to see the ACT Sexual Health model. Scroll down to the second page to see a diagram of how the program works. 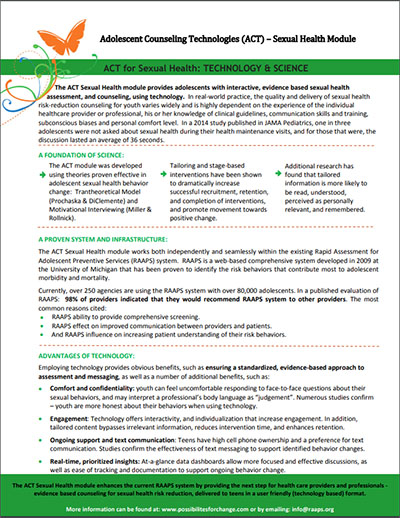 There is an urgent need for the expanded use of health information technology (HIT) to improve the delivery of preventive services to our nation’s teens—and for more collaborative public health surveillance in order to monitor the effectiveness of these quality improvement efforts. Participating sites showed the following improvements:

We also found that teens care about their health and were interested in receiving sexual health information.

We look forward to expanding the use of this program. We believe it can have a meaningful impact on adolescent sexual risk behavior.

For more information about ACT and its role in identifying and reducing risky behaviors, visit possiblitiesforchange.com/ACT.

Jennifer Salerno, DNP, is the founder of Possibilities for Change, an organization that is transforming adolescent health through the development of state-of-the-art health care delivery systems designed to support the professional workforce and empower adolescents and their families. She can be reached at jsalerno@pos4chg.org.