5 Things You Should Know About Adolescent Sex Trafficking

Download this 8-page guide to identifying youth at risk

An ETR Best Practices Guide.
Find out more about these essential facts:

How to Talk with Students About Electronic Dating Violence

Teens, tweens and even younger kids are on smartphones, tablets and computers a lot. Of course, tech can be a force for good. Parents, educators and youth themselves report many benefits from the presence of technology in young people’s lives—connecting with family and friends, sharing experiences with distant peers, learning, being entertained and more.

What Educators Need to Know About Online Sex Trafficking 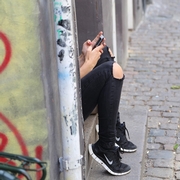 First published on the Psychology Benefits Society blog of the American Psychological Association.

What comes to mind when you hear the words “sex trafficking”?

If you’re like a lot of people, you might think of a sinister alley in a foreign country serving as the local red light district. Or you might imagine a woman who comes to the U.S. with hopes of a better life for herself and her family who is then forced to sell her body to pay debt bondage. Maybe you think of a young woman violently forced by a hated pimp to work the streets.

While all of these images do constitute forms of sex trafficking, they barely begin to tell the story. And as these disturbing pictures run through our minds, few of us add to our list the children and teens in our own communities. We aren’t likely to think of the students in our classrooms as they navigate the Internet or check their social network sites.

Yes, It's Real and It's Here

Myths and misconceptions about human trafficking abound. The facts? Trafficking is both an international and a domestic problem. It affects young people as well as adults. It involves individuals of different sexual orientations and a range of sexual identities. There’s a good chance it’s affecting youth you know.

By addressing myths and clarifying the issues, educators have unique opportunities to make a difference. They can take practical steps to prevent trafficking and help young people protect themselves and their peers.

What Is Sex Trafficking?

According to the federal Trafficking Victims Protection Act (TVPA), human sex trafficking is the recruitment, harboring, transportation, provision or obtaining of a person for the purposes of a commercial sex act, in which the sex act is induced by force, fraud or coercion, or in which the person induced to perform such an act is a minor. When minors are involved in commercial sex, even in the absence of force, fraud or coercion, they are considered human trafficking victims.

What’s Online Got to Do with It?

Youth are recruited into sex trafficking in a range of ways—an older “friend” they meet at a party, a “boyfriend” who promises them a modeling or movie career, a family member or even, as some of ETR’s research has demonstrated, a same-age romantic partner. They may also be recruited by a Facebook connection, an Instagram follower or someone they meet in an online chat room.

Remember that 9 in 10 teens go online daily, and 1 in 4 say they are online “almost constantly.” Sexualized selfies and other images are frequently shared. Teens often comment on one another’s posts with flattering remarks that are sexualized in nature (“nice body,” “you’re hot,” “what a babe”).

As this has become more normative behavior, the recruitment and grooming behaviors of traffickers stand out less. Twenty years ago, a stranger asking a teen to pose for nude photos would have set off alarms for most youth. Today, it’s not unusual for someone a teen doesn’t know to praise a photo, encourage more explicit sharing and even suggest an in-person meeting.

One recent report found that while most of the trafficking victims surveyed originally met their trafficker in person, younger victims recruited more recently were significantly more likely to have met their trafficker online. Websites, social networking sites and other online tools are being used not only to recruit youth, but also to facilitate trafficking and connect with customers.

What You Need to Know

Here are four things all educators need to know about online sex trafficking.

We believe this learning is also relevant to the prevention of human trafficking. Few youth who become involved in trafficking are abducted off the street by menacing strangers. Rather, they are engaged, courted and groomed by skilled individuals who read a young person’s need for attention, desire to be special or yearning for love.

Sometimes a trafficker offers the most powerful affirmation a young person has ever experienced—“You are beautiful exactly as you are.” This can be especially persuasive for youth who may have been marginalized in school settings, including gay and transgender youth, young people with learning differences or mental health issues, and survivors of trauma and sexual abuse.

What Educators Can Do

What Are You Doing?

Pamela Anderson, PhD, is a psychologist and Senior Research Associate at ETR with more than 10 years of experience conducting research in the area of sexual and reproductive health. You can reach her at pamelaa@etr.org. Marcia Quackenbush, MS, MFT, MCHES, is Senior Editor in charge of ETR’s blog and newsletters. She is a licensed marriage and family therapist with over 25 years’ experience providing services and materials to schools and communities. You can reach her at quam@etr.org.