This time a year ago, I was taking the last final exam of my undergraduate career! I was also preparing for the next chapter of my life as an ETRian in our Research/Science Department. Now that a year has gone by, I’m looking all over for where the time went. I guess time flies when you’re having fun!

Here are five things I’ve learned since being at ETR. 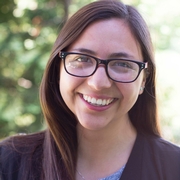 In 1994, two very important events happened in my life. First, one of the earliest papers on Social Dominance Theory was published. Second, I was born.

Social Dominance Theory holds that people develop a set of beliefs—“legitimizing myths”—that support their attitudes about social inequities. These beliefs allow people to explain their own role and place in the social world, whether they are in positions of power, or in inequitable situations where they are dominated by those in power.

These ideas were going to have a big impact on me. I grew up in dichotomous worlds between school and home life. My neighborhood was poor, but I attended school in a more affluent neighboring city. I couldn’t help but notice the inequities in these two environments, many of which seemed to be based on race and class.

These experiences were among those that initially attracted me to the broad area of social inequality. Folks in my residential neighborhood often had untreated health problems because they couldn’t afford to see a doctor. They resorted to many “remedios caseros,” or home remedies, often after the issue had persisted for some time. 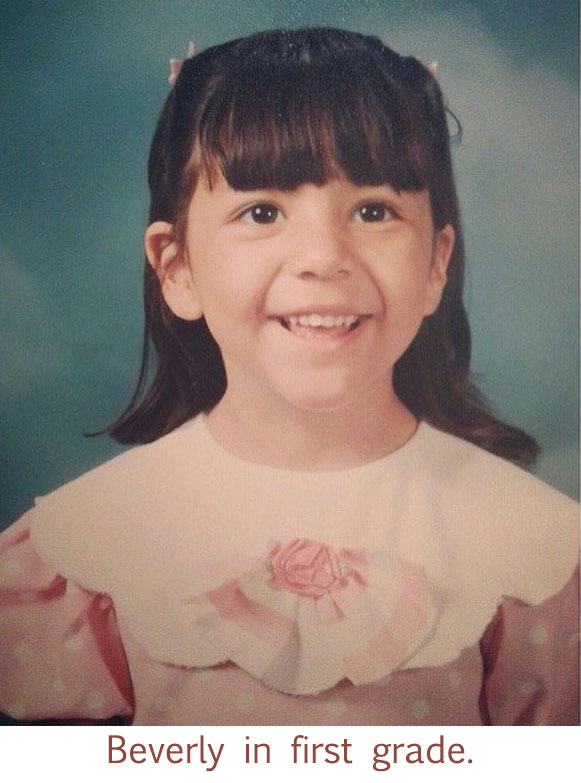 I also noticed many of my neighbors’ parents held jobs which required manual labor, such as being a gardener or a house painter. Some were unemployed and waited to get work on a busy street sidewalk. On the other hand, many of my classmates’ parents worked in offices, or even from their homes.

Throughout the course of my K-12 experience, I saw hundreds of examples of inequities such as these.

Shortly after declaring psychology as my undergraduate major in college, I was introduced to a wide range of topics which explored how and why inequities exist. I delved into readings that emphasized how important it was for researchers to see individuals as part of a larger collective in society, and to acknowledge that broader societal contexts both influence, and are influenced by, individuals themselves.

Then I discovered that 1994 paper on Social Dominance Theory, along with other readings on the dynamics of inequity and power. These were central to the groundwork in what would eventually become my undergraduate honors thesis.

During my senior year, I used this social psychological lens when conducting my honors thesis research, which explored aspects of Social Dominance Orientation (SDO)—essentially, the extent to which people prefer group-based hierarchies generally, and in particular prefer that a group they belong to dominates other groups.

My thesis explored SDO as it’s implicated in attitudes and beliefs toward a commonly marginalized population in our society: prisoners. My findings suggested that people who scored high on Social Dominance Orientation were more likely to: (1) believe it is disposition (rather than situations and the environment) that causes crime; (2) express negative attitudes toward prisoners; and (3) believe that prisons should remain punitive (rather than be reformed to be rehabilitative). 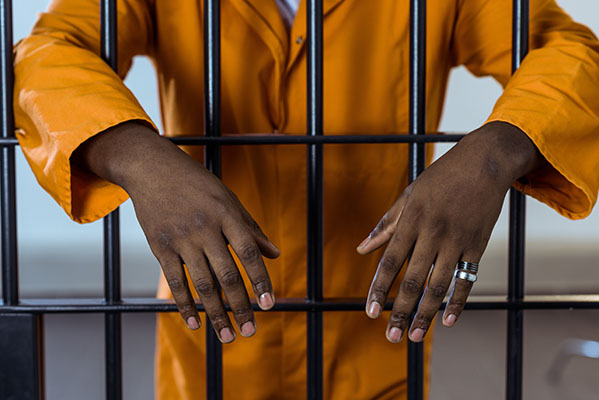 Ultimately, my thesis allowed me to understand that either inadvertently or intentionally, individuals can work within groups to maintain or reject systemic inequities. On a broader level, I also realized that inequities can, in many cases, be implicated in individual, relational, societal and contextual, or other factors.

Shortly after this, I graduated college and began working at ETR. Since being at ETR, I’ve learned of the importance of studying not only systemic inequities, but also exploring the utility of applied interventions to reduce these inequities.

For example, how can theoretical research guide us in applied efforts to eliminate inequities in health status? How is health status related to other inequities? What factors are likely to modulate these relationships, and how can they be targeted to reduce their influence?

One specific question I would like to look into further relates to the neural mechanisms underlying sociopolitical attitudes—why do people hold the political and social beliefs they do? And how can we leverage neuroimaging tools to explore these dynamics, which more typically rely on other methods of investigation such as self-report? Some promising work using neuroimaging has already been done.

For example, research has shown that two parts of the brain are implicated in empathy responses—the anterior insula (AI) and anterior cingulate cortex (ACC). In other words, when individuals exhibit empathy towards another person or group, the AI and ACC become active, typically showing a high neural response in these areas. 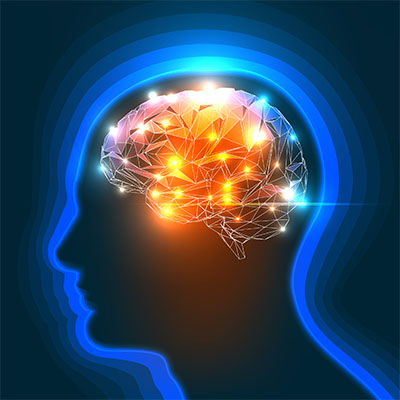 In 2009, new research suggested that the same parts of the brain also become active while individuals who score high on the SDO scale (those people who do prefer group-based hierarchies and dominance) watch scenarios where others are in pain. However, these individuals show less response in the AI and ACC than people who indicate more empathic concern. Individuals with high SDO actually have a different neural response to situations that can arouse empathy in individuals with low SDO.

Ultimately, these findings suggest that SDO has a neural basis in the brain, wherever an individual falls on the scale concerning dominance orientation. This is an important finding that challenges some of the current SDO literature that likens this trait only to a personality variable or an observable, behavioral influencer of sociopolitical attitudes.

It would be interesting to further explore the potential neural basis for social dominance as it relates to empathy, particularly its potential relationship to group classification in political contexts. Here’s an example: members of a political party are likely to classify themselves as belonging to their own party. They might then consider members of another political party to be outsiders.

In events of civic discourse, these people may feel more empathy for members of their own party—they can understand why their same-party associates feel so passionately about a candidate or issue. However, they may be baffled about why someone on the opposing side feels equally passionate about the opposition view.

Researchers have suggested that malleable perceptions of empathy are related to a greater willingness to understand other individuals holding opposite views. Thus, empathy may facilitate more productive civic discourse. On the other hand, for individuals who lack empathy for the outsider point of view, positive discourse with outgroup members may be difficult. 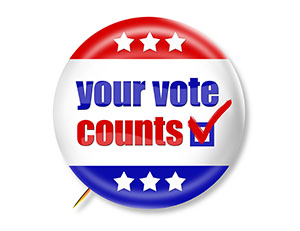 We have certainly seen many examples of dissension occurring across our nation and around the world over the past several years. Domestically, this was especially true on social media sites in the months leading up to the 2016 presidential election—consider the profusion of fake Americans on Facebook, commissioned by Russia to leverage exactly this kind of conflict to influence the American election.

How can we become better informed about why individuals are not able to engage in productive civic discourse—to listen to others, to learn, and to empathize, even in the face of disagreement? How might we design effective remedies? I believe we will gain valuable insights by exploring the neural basis of these types of interactions—quite possibly with greater success than more traditional methods of investigation, such as self-report.

A second question I am interested in exploring is whether there is a causal relationship between the ways people identify themselves socially—including how they place themselves in the social hierarchy—and the way they understand social information. Does this influence their perception of political information? Health education? Economic issues?

If we find that there are relationships between social identification, Social Dominance Orientation, and how people perceive and respond to social information, we may be able to develop interventions that assist them with information-processing. This may lead to more grounded socioeconomic or political decision-making, and might even minimize some of the powerful divisiveness we are currently experiencing as a nation.

Finally, I am interested in exploring how stress interacts with Social Dominance Orientation and empathy in either blinding or illuminating empathy for outgroup members’ marginalization. How might stress modulate the relationships between SDO and empathy? And how is this related to the ways individuals with differing political beliefs understand outgroup members’ concerns or grievances? 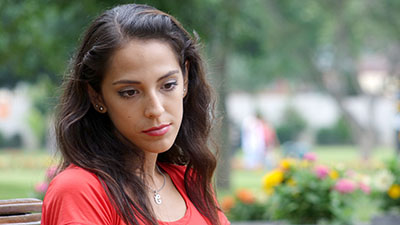 Might stress also be related to poorer health outcomes for those who discriminate? Is the stress of being a discriminator also unhealthy?

If this were so, would it provide a persuasive argument for people with high SDO against the kinds of discrimination they are likely to practice? If practicing discrimination is unhealthy, could this be leveraged in an applied intervention to actually find a remedy for high SDO? Would people with high SDO choose a remedy that might change their views but could also improve their longevity? How might this look on a larger scale, and might it have long-lasting influences that move us toward greater societal equity?

ETR’s Research is Evolving Too

Over the past few years, our work at ETR has evolved as well. We believe that health and education outcomes are influenced by complex interactions between people and their environment. We’ve developed The Health Equity Framework to illustrate the interconnections that have so much influence on health. 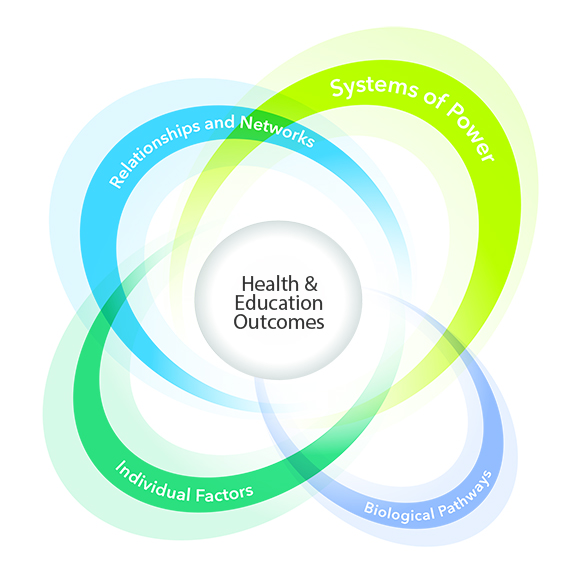 This framework recognizes four distinct areas related to educational and health-related outcomes: biological pathways, individual factors, relationships and networks, and systems of power. These four factors contribute to the overall advancement (or decline) of equitable outcomes.

This framework is especially noteworthy because it recognizes that many factors contribute to instances of inequity. To omit any given factor is to confound our findings and confuse our work. As an emerging researcher, I appreciate the nuance in this framework that considers the overall contexts in which inequities become perpetuated. These elements resonate with the experiences I had as a child, traveling daily between two neighborhoods with highly inequitable health profiles.

My work at ETR has galvanized me to seek answers to the research questions that are most compelling to me. I believe that ultimately, it is our duty as researchers to better understand who our individual selves are as part of a collective society. We need to ask why and how dichotomous worlds can exist in neighborhoods, towns or cities that are right next to one another. We must think about the ways we all play a role in the institutional structures of our society that are implicated in societal inequities. We must examine the effects these structures have on our own thinking and choices.

Beverly Iniguez-Conrique is a Research Assistant with ETR. Her research focus includes building greater equity among participants in STEM learning and careers. She can be reached at beverly.iniguez-conrique@etr.org.