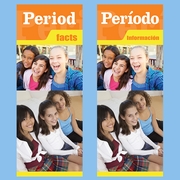 Thought about menstrual periods lately? Maybe, maybe not. But if you were a pre-menstrual kid, teetering on the edge of puberty, you'd probably be thinking about them a lot.

The start of menstruation is a major event during puberty. But the basics about periods aren't addressed with much clarity in the kinds of media kids typically use—television, movies, social media, music.

ETR is excited to announce the release of an updated and revised Period Facts pamphlet (available in English and Spanish).

"Period Facts" has clear, direct answers to some of the most common questions kids have about periods:

Kids have lots of questions and concerns. Our pamphlet encourages them to trust their bodies and talk to their parents, relatives or other trusted adult if they feel worried or confused.

The Year of the Period

In December 2015, NPR reporter Malaka Gharib declared that 2015 was "The Year of the Period." News and social media "catapulted the once hush-hush topic into the open" with coverage of a number of menstruation stories:

Gharib checked the number of times the word "menstruation" appeared in five national news outlets and discovered it more than tripled from 2010 to 2015, from 47 to 167. Periods had come out of the (water) closet into the open!

The Persistence of Periods

The spotlight on menstruation-related news and activism continued in 2016. In July, New York City Mayor Bill de Blasio signed a package of legislation that guarantees free access to feminine hygiene products to all people in the city's public schools, prisons and homeless shelters.

There's a growing number of entrepreneurs creating alternative, environmentally-friendly products such as reusable pads, menstrual cups and period-proof underwear. And some of these businesses have joined activists and introduced campaigns to help millions of people around the world who have limited access to products (for examples see Thinx; Girls Helping Girls. Period.; The Period Project).

Let's Go with This Flow

It's exciting to see menstruation destigmatized, and to see such a creative response to helping people have the access they need to hygiene supplies. I'm the mother of a daughter who is dipping her toes in the pool of puberty. She hasn't started her period yet, but I'm thrilled that when she does start she will experience greater openness and affirmation about the process. Now let's keep the momentum going strong.