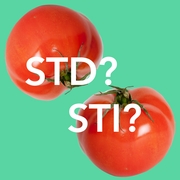 If your work involves talking to people about sexual health, you must be talking to them about STDs. Or STIs. Or both. Right?

As the great STD-STI terminology challenge continues, just about everyone has had to choose one term or the other. Well, everyone except for the people who use both interchangeably to mean the same thing. Or those folks who use each in distinct ways to mean different things.

Over the years, ETR has stayed consistently with STD, especially in our patient education materials. This was the term that was easiest for most people to understand, particularly teens, young adults and reluctant/low-literacy readers. It was also the term used by the CDC and many other leading health organizations.

Over time, we heard STI more frequently in conversations within and beyond our organization. Our researchers and trainers often preferred the term STI. Colleagues in other organizations shared their nuanced understandings of one term or the other. Customers sometimes called to complain that a pamphlet or curriculum used the “wrong” term—“the one my students don’t understand” (that would be STI) or “the outdated term” (that would be STD).

Just to Be Perfectly Clear

Many well-informed experts make absolutely no distinction between STI and STD. Others feel the distinctions are real and important.

For those who make a distinction, most would say STD describes a condition with visible signs and describable symptoms—a drip, an itch, a bump, fatigue. STI encompasses the broader spectrum of conditions both with and without symptoms.

There was some idea that using STI would make it clear to everyone that sexually transmitted conditions often have no symptoms. It might also lessen the stigma people frequently feel about having these conditions, making them more amenable to testing and treatment.

H. Hunter Handsfield offers a beautifully lucid review of the history and thinking around this issue. (The entire column is included on this preview page. Despite the header, you don’t need to pay to see it.) I agree wholeheartedly with Handsfield when he says, “Those who prefer either term should use it freely, with neither defensiveness nor pride in either one.”

I asked a few of my ETR colleagues to share their current thinking and preferred term for their work. Here’s what they had to say. (Laura Perkins expresses the standard for ETR’s Editorial Department, while our other contributors express personal opinions.)

For a couple of decades there’s been a debate in the public health community over whether to use the term STD or STI in patient education materials. Many leading authoritative organizations continue to use STD, including CDC, NIH, Kaiser Permanente, and most state departments of health. But some organizations have switched to using STI, or to using both terms interchangeably.

Once a year for nearly 15 years, ETR’s Editorial Department has surveyed consultants and customers about their preferences and concerns. So far, each survey has resulted in our continuing to use STD. Customer clinicians who need to help clients and patients protect themselves continue to use STD because this term is more familiar to the lay public.

Our 2015 survey indicates that this is still the case. A majority of educators surveyed prefer the term STD. This is especially important because ETR is committed to providing materials with clear, accessible and accurate information about sexual and reproductive health for people who read at the 4th to 8th grade level.

We’ll continue to check in.

My focus is on key messages regarding health, safety, testing, treatment and removing stigma. I use both terms because in my line of work it doesn’t always matter what term you use, as long as you’re getting across those key messages. In sex ed, if you’re spending time explaining the distinction between STDs and STIs, that’s time you could be spending talking about how to remove barriers to testing.

I switched to STI fairly consistently about 5 years ago. “Infection” conveys the message that these viruses and bacteria are transmitted from one person to another, whereas “disease” distances us from the concept of transmission. I feel this distinction creates more awareness of the vulnerability we all share, decreases the tendency to distance ourselves from those with an infection, and increases empathy and personal responsibility.

In some contexts, STD may be more appropriate, and in others STI may be preferred. Students with whom I have worked (ages 13–40) sometimes ask for clarification because STD is still more familiar. I have found that it takes about 1 minute to explain why I use STI and briefly describe the shift in terminology, without judgment, and then move on with the main content of my lesson, accepting use of both terms by students.

In a context where the focus is on understanding symptoms and encouraging testing and disclosure to partners, I think STI is more effective. In situations in which more comprehensive information is presented, the STI/STD debate can be explored as a conversation among students to engage them more deeply in the subject.

Finally, I think it wise to consider our audience when selecting our words. Language can make a difference between creating a safe space or a hostile one. I think about which term might land better on a student who has herpes, is currently treating a case of chlamydia, or whose partner has another STI, and who may have already experienced stigma or hostility from others. I would want to use the term that feels most benign and wonder if infection sounds more manageable to them than disease? I encourage others to simply consider this perspective when choosing which term to use in various contexts.

I prefer the term STI because it seems more accurate to me. Not all sexually transmitted infections are diseases. Also, the term “disease” carries more stigma than “infection.” If we want those infected with STIs to quickly and thoroughly notify their sexual partners, it’s helpful to reduce the shame factor.

But I do stick with STD when we need to because of funder preference, or because we are creating companion materials to existing programs.

This reminds me of a time some years ago when there was a movement to change “transmitted” to “transmissible,” as many STIs can be transmitted in ways other than sexually.

And What Term Do You Prefer?

There are sound reasons for choosing either term, or both. Which is working for you right now? Why is it best for your purposes? We’d love to hear your thoughts on this one.

Marcia Quackenbush, MS, MFT, MCHES, is Senior Editor at ETR. She can be reached at quam@etr.org.