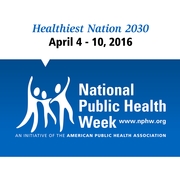 I love working for an organization that’s making a difference in the world of public health. And that’s one of the reasons I’m grateful to the American Public Health Association for promoting National Public Health Week (April 4-10). There’s no better way to reflect on the power and potential of this extraordinary field.

Here are a few of the public health issues that have been on the radar at ETR over the past year. We’re watching some because of impressive reductions we’ve seen in risky behaviors. Others raise intriguing challenges and questions, and we’re eager to see how these issues develop in the future.

When vaping first began to be popular, some of us thought (or hoped?) it might just be one more blip in the world of youth and tobacco. Snus, bidis and those dissolvable tabs never became especially popular among teens. Vaping, it turns out, is a completely different animal. Use of vaping devices tripled among middle and high school students over a single year (2013-2014). It’s become even more popular than cigarettes. It’s seen as a cool, safe alternative to cigarettes.

Check out our video about E-cigarettes, which describes our pamphlet 10 Things to Know About Vaping.

The increasing use of Pre-Exposure Prophylaxis (PrEP) as an HIV prevention strategy shows great promise. In trials evaluating PrEP, the risk of contracting HIV decreased in at-risk individuals by up to 92%. Phenomenal!

Now our task is to spread the word. We have a pamphlet on PrEP that conveys the most essential information in accessible, engaging language (also available in Spanish).

Twenty-three states and the District of Columbia now have some form of legalized marijuana. Some states restrict use to medical applications, others allow recreational use. Still others have decriminalized possession of small amounts.

What impact will communities see as standards and practices about marijuana use relax? The jury’s still out on this one.

Some reports suggest the impacts are mild and not necessarily negative. Medical marijuana use may not affect adolescent rates of use, but Colorado has also reported increases in emergency department visits by out-of-state “marijuana tourists” unprepared for the powerful effects of marijuana edibles. We’d like to see more research on these issues, particularly as more states legalize recreational marijuana use.

Our pamphlet and poster on legalized marijuana address some of the critical areas of concern (e.g., risks to adolescents; risks of edibles; dangers of driving under the influence; risks of use during pregnancy).

We enthusiastically welcome the progress being made on LGBTQ inclusivity and equity. We’re seeing changes in sexual and reproductive health classes, educational settings, health delivery and the culture in general. There has been some exciting progress in this arena—and we clearly have more work to do.

We are impressed by The Teaching Transgender Toolkit, a fine resource that offers guidance and lesson plans for training a variety of audiences about transgender issues. We are heartened by the Call to Action for LGBTQ inclusivity issued recently by Advocates for Youth, Answer, GLSEN, HRC, Planned Parenthood and SIECUS.

And we’re proud of our own LGBTQ supplement for sexual health programs, a resource designed to increase inclusiveness for LGBTQ youth in evidence-based and other sexual and reproductive health programs.

Trends in Teen Pregnancy and Childbearing

Wow. Teen pregnancy and birth rates in the U.S. have declined almost continuously over the past 20 years. In fact, between 1991 and 2014, teen births declined by 61%. These are public health statistics we love to see!

The main factor driving these trends is more frequent and more effective use of contraceptives by teens. Decreases in teen sexual activity account for some of the change, but a much smaller portion. Pregnancy rates have dropped across the nation and in every state, as well as across racial and ethnic groups. However, disparities continue by region and ethnicity.

What are the issues of particular importance this year for you and your organization? We’d love to hear about the topics you’re tracking, the work you’re doing and the ways you’re joining in on this noble effort to better the world.

Marcia Quackenbush is Senior Editor at ETR and manager of the blog. She’s proud to call herself a Public Health Nerd. She can be reached at quam@etr.org.