I recently found myself at the 40th birthday party of a male friend. At the end of the evening, I was the only woman at the table, listening to male friends discuss online dating, sexual activities and preferences. They were comparing notes on how to meet new partners, including the use of some cool new dating apps. Most of these men were newly divorced or separated, and it was what some might call a racy conversation—each wanting to outdo the other.

The conversation was rich with the sorts of questions, assumptions and perceptions researchers like me get lost in. I was listening for themes and thinking about areas where I needed to gather additional information.

I recently found myself at the 40th birthday party of a male friend. At the end of the evening, I was the only woman at the table, listening to male friends discuss online dating, sexual activities and preferences. They were comparing notes on how to meet new partners, including the use of some cool new dating apps. Most of these men were newly divorced or separated, and it was what some might call a racy conversation—each wanting to outdo the other.

The conversation was rich with the sorts of questions, assumptions and perceptions researchers like me get lost in. I was listening for themes and thinking about areas where I needed to gather additional information. 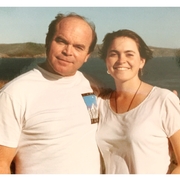 “I feel like I’m having a heart attack.” That’s what he told people throughout the day that would be his last.

At 57, my dad was just 3 years away from retirement. He was an avid surfer, kayaker and cyclist. He was a beloved teacher and vice-principal at the school right around the corner from his home. He was ready for the sweet life he had worked so hard to create.

He never dreamed his life would be cut short, especially by a heart attack he knew he was having. He didn’t realize that his decision to “sleep it off” and find a doctor in the morning would have such tragic consequences for him, his family, friends and community.

His story is not uncommon. Maybe it even reminds you of someone you know. The more people I tell about my dad’s death, the more I hear similar stories about other men. These fathers, husbands, grandfathers, uncles, sons and friends—loved ones whose lives ended far too soon—died unnecessarily from preventable health issues.

These stories and what they reveal about the troubling state of men’s health changed my life, personally and professionally. What I discovered provided the impetus for me to shift my focus from research on adolescent health to action on men’s health. It fueled the passion necessary to launch MenNavigate, a new coaching resource designed to help men stay alive.

In my work as a health strategist, I am committed to saving men’s lives from being cut short unnecessarily. We can promote optimal health with simple strategies and straightforward support. These are the steps that will ultimately shift the men’s health paradigm from “health crisis” to “engaged community consciousness and action.”

To these ends, and in celebration of Men’s Health Month this June, MenNavigate is hosting a free 4-part virtual series, “21st Century Men’s Health & Vitality Round Tables: Every Man’s Solutions to Today’s Men’s Health Crisis.” These are the kinds of conversations I hope to see grow across the country, engaging men and women alike in dialogues about changing our paradigms, practices and outcomes concerning men’s health.

My dad did not have his own doctor. He hadn’t been to a doctor for several years before his death. When he woke up feeling ill that morning, he didn’t have a medical provider to call. There was no one who knew him and was familiar with his health history.

This is probably the main reason he did not see a doctor the day he needed one most.

For all of us, having a medical provider we like—someone who respects us—makes it much easier to set up those regular check-ups, get test results and discuss them with a knowledgeable person. Knowing and tracking health numbers is critical to creating and sustaining your health and fitness levels. And while this is true for everyone, the simple fact is that women are more likely than men to have a doctor they see regularly. They are more likely to seek preventive care.

The Men’s Health Network has called the state of men’s health in the U.S. a “silent health crisis.” According to Dr. David Gremillion, an expert on men’s health and a spokesperson for the Network, this crisis is the “fact that, on average, American men live sicker and die younger than American women.”

Consider these statistics (we’ll look at how to beat them later).

Suicide: Men are 4 to 10 times more likely than women to die by suicide.

Cancer: Men are 1½ times more likely than woman to die from cancer.

The reasons men are more affected by these health issues are varied and complex. It is not simply a matter of blame, fault, neglect or biology. In fact, I see the primary cause as a social-cultural issue.

For example, most men are not socialized to ask for help. They are not supposed to appear unsure or weak, depend on others, or be out of the loop on important information. If this is a man’s social-cultural milieu, it’s tough for him to reach out and ask for guidance on something representing vulnerability, such as getting help for a health issue.

And what do we do about this? Really, it is up to all of us to shift our ideas and behaviors around men’s health. We need more conversations and dialogue about health. We need to talk about physical, mental and emotional health. We need to provide the space for men and boys to ask questions, be heard, and find support.

These three keys get men more engaged and interested in their own health. They create an environment in which men are more comfortable playing an active role, asking the right questions and taking practical steps toward healthy change.

1. Just know. Knowledge is power. This old cliché couldn’t be truer, especially when it comes to health and vitality.

When my dad woke up on that last day of his life, he felt like a flu was coming on. He went on a 20-mile bike ride to shake it off. It didn’t work. He felt worse.

By the end of the day, he recognized the symptoms he was having were probably those of a heart attack. This was a great start, but what he didn’t realize was how urgent the situation was. That prevented him from seeking immediate care. In the end, not knowing cost him his life.

Overall, men tend not to know about or understand the specific health issues they are facing and how urgent these can be. It’s critical to know the basics—how to check vital signs (for example, resting heart rate), do regular self-exams and understand the health numbers from regular screenings. Men also need to know their family health history to determine what their current or future risks might be. They need to know what they can do to prevent the health concerns faced by their family members in the past.

2. Just one. So many people came to my dad’s funeral, we needed to rent a community hall to hold them all. Over 500 people were there to say good-bye. But, to stay alive on that last day of his life, he’d only needed one—one person he knew whom he could call and speak to honestly, one person who might have heard his fear and vulnerability, one friend who wouldn’t have let him wait at home to grin and bear it, who would have gone to the ER with him and stayed around to keep him relaxed and focused. Most important, he needed a friend who would not have left him alone.

When men have someone like this in their lives—at least one—it can literally change their futures. I tell my clients to find that person and talk to him or her. I coach them to say, “You are the person I will call if I need this kind of support.”

A lot of men don’t have a person like this. At MenNavigate, when clients are in this situation, we have them look around their lives, even exploring some unlikely places. They must ask themselves, “Who would I be able to talk to if I really needed someone?” They may have to work hard at finding an answer.

Some people have had success starting this type of conversation by asking a friend, family member or acquaintance to be an In-Case-of-Emergency (ICE) contact on their cell phones. People generally like to help others and enjoy being considered dependable and trustworthy.

Studies suggest we all need at least one person we can count on, and three people would be even better. These are the people who will stand by if we are waiting for test results that could be serious; who will listen if we feel anxious about a diagnosis, treatment or procedure; who will be there for us if we feel down about life in general.

3. Just do it. It all comes down to this in the end. Men tend to be reluctant to take action about their health when they are not feeling well. I personally know three men who went to the emergency department for ingrown toenails. How did something like that become a medical emergency? They avoided addressing the issue, or their need for care, until the infection was so severe they literally could not walk.

There are many reasons for the hesitation to act. For my dad, it was not having a doctor to call, not understanding how critical his situation was, and not having someone to reach out to for support.

His was not a unique situation. But being prepared and having a plan in place when something does come up makes all the difference. These fairly simple elements are life savers.

These keys—knowledge, support, action—are the first steps in turning the tide of the men’s health crisis. And this is not just a men’s issue. All of us are needed.

When healthy men stay engaged in their lives, act in the interest of their health and cultivate their vitality, everyone benefits—their families, partners, friends, colleagues and communities.

This June, make Men’s Health Month matter in your own community. If you’re a man, start working on that list of three people who will be there to support you in protecting your health. Talk with your friends about how important this is. Be a role model for the male youth and children around you.

If you’re a woman, ask the men in your life about their attitudes and experiences with health issues. Talk to them about identifying a support person for health and let them know how important this is to you. Support the children and teens in your life—male and female—in building healthy attitudes and practices.

When we take the time to talk with the men and boys in our lives, express our interest in the health issues that affect them, and create a space to hear their answers, we are making a difference that matters.

I hope you’ll join our upcoming roundtables to contribute your own insights, and hear those of others, as we shift that paradigm from crisis to consciousness and action.

Anne Freiwald, MPH, is a health strategist and coach focusing on men’s health and vitality. She has been working in the preventative health field for over 25 years and  is the founder of MenNavigate. She can be reached at mennavigate@gmail.com.