Hookah. The very word brings a sense of excitement to the minds of many young adults. Not only can they sit around a table among friends and smoke, they can share this beautiful, ornate device that makes it an extra-special experience!

What was once a cultural tradition dating back 500 years in Middle East regions of the world has become a trend. It’s “cool,” “sexy,” “fun,” “relaxing.”

Letter from a Salty College Student: Our Editor Responds 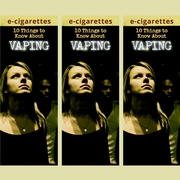 We hear regularly from customers about our health education materials. Sometimes they share praise and compliments for a product they’ve found helpful. Sometimes they ask for a new title or resource they need. And sometimes they offer constructive feedback about something that doesn’t quite work in their situation.

We’ve also gotten some really vitriolic criticism from vapers, who tend to dislike our public health messages about e-cigarettes. In fact, when we posted a video a while back about our new vaping title, we actually had to turn off public comments because of all the offensive outbursts, expletives and threats.

That’s one of the reasons our Product Editor, Laura Perkins, was particularly touched by a critical but respectful email she received recently from a college student in New York. He explained that he appreciated it was too early to know all of the potential long-term effects of vaping. But with patience and good humor, he also pointed out that he had personal knowledge of people—including himself—who had switched from smoking to vaping and seen significant benefits. He suggested we consider presenting vaping as an alternative to smoking and avoid making it sound as if vaping is as bad as heroin. He described vaping as a great way to take down the tobacco industry.

He signed his email, “Regards. A salty college student.”

First, I want to let you know I don’t often respond to people who write me about our pamphlet on e-cigarettes because these notes are usually filled with personal insults and general nastiness. I want to respond to your note, however, because it’s respectful and funny and I appreciate the collegial tone.

Your notion about promoting e-cigarettes as less toxic alternatives to traditional cigarettes is firmly grounded in the perfectly respectable public health strategy known as harm reduction. There are lots of public health advocates out there who agree with you! Harm reduction folks recognize that you can’t stop people from using drugs, drinking and having sex. And if you want to help people live long and prosper, you teach them how to use moderately or cut back, and how to use condoms and get tested for STDs fairly regularly. If you have an interest, I could see you pursuing a professional career in public health! Check it out.

It’s incredibly difficult to write a pamphlet about a potentially harmful substance or habit when there’s not very much known about it in the first place and there are hardly any regulations being enforced. That’s where I started out with writing a pamphlet on e-cigarettes.

Basically, I tried to point out this fact in the pamphlet: we really don’t know the long-term effects of vaping. And we won’t know for a very long time. So people who choose to vape should know that it’s too soon to tell whether or not there will be long-term harm.

There are still studies coming out reporting on the nasties in e-cigs, and there’s definitely evidence that teenagers who don’t smoke traditional cigarettes are trying e-cigs instead. And there are some studies (mostly out of Britain) claiming that e-cigs do indeed help people quit. But nothing is for sure—yet.

Most of all, I really support letting the general public know what’s going on behind the advertising screens. That’s all. So as we learn more about vaping, health risks and health promises, I will update and revise our pamphlet.

You can see the lineup of our vaping materials here, including our pamphlet E-Cigarettes: 10 Things to Know About Vaping (also available in Spanish).